In Order to Read Online or Download The Ghostfaces Full eBooks in PDF, EPUB, Tuebl and Mobi you need to create a Free account. Get any books you like and read everywhere you want. Fast Download Speed ~ Commercial & Ad Free. We cannot guarantee that every book is in the library! 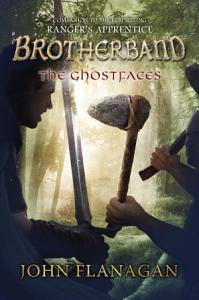 From John Flanagan, author of the worldwide bestselling Ranger's Apprentice, comes a brand-new chapter in the adventures of young Skandians who form a different kind of family--a brotherband. When the Brotherband crew are caught in a massive storm at sea, they’re blown far off course and wash up on the shores of a land so far west that Hal can’t recognize it from any of his maps. Eerily, the locals are nowhere in sight, yet the Herons have a creeping feeling they are being watched. Suddenly the silence is broken when a massive, marauding bear appears, advancing on two children. The crew springs into action and rescues the children from the bear’s clutches, which earns them the gratitude and friendship of the local Mawagansett tribe, who finally reveal themselves. But the peace is short-lived. The Ghostfaces, a ruthless, warlike tribe who shave their heads and paint their faces white, are on the warpath once more. It’s been ten years since they raided the Mawagansett village, but they’re coming back to pillage and reap destruction. As the enemy approaches, the Herons gear up to help their new friends repel an invasion. In this sixth book in the action-packed Brotherband Chronicles, the Herons find themselves in unfamiliar lands and prepare for battle with a ruthless, unknown enemy. From the Hardcover edition. 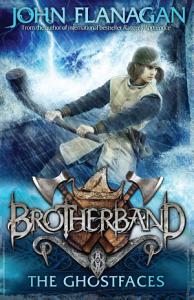 When the brotherband crew are caught in a massive storm at sea, they’re blown far off course, surviving only because they wash up on the shores of a land that isn’t on any of Hal’s maps. They’re being watched, but they don’t know if the locals are friend or foe – until the brotherband spring into action to rescue two children from a marauding bear, earning the Herons the gratitude of the Mawagansett people. The peace is short-lived. The ruthless, warmongering Ghostface tribe are heading their way, and the Herons must help their new friends repel an invasion. Among the nail-biting battles and heart-stopping action, one Heron must make an agonising decision that could change the brotherband forever. 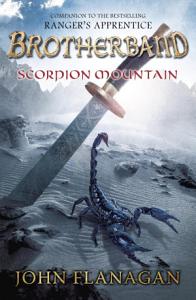 From John Flanagan, author of the worldwide bestselling Ranger's Apprentice -- an all-new adventure featuring the Brotherband crew and one of our favorite Rangers! Hal, his Brotherband crew, and the Ranger Gilan have freed the twelve Araluens sold into slavery. Returning to Araluen, Gilan is given a new mission by King Duncan: protect his daughter’s life. Princess Cassandra has survived one attempt on her life already, and now whispers of a second attempt have reached the kingdom. A deadly sect known as the Scorpion Cult is thought to be behind the assassination threat. Not waiting to see if the knife will strike true, the Brotherband again team up with Gilan to track down the would-be killers. In this fifth book in the Brotherband Chronicles, old friends reemerge to take on new enemies as the worlds of Ranger’s Apprentice and Brotherband join forces in battle! 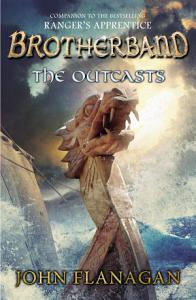 From the author of the global phenomenon Ranger's Apprentice! They are outcasts. Hal, Stig, and the others - they are the boys the others want no part of. Skandians, as any reader of Ranger's Apprentice could tell you, are known for their size and strength. Not these boys. Yet that doesn't mean they don't have skills. And courage - which they will need every ounce of to do battle at sea against the other bands, the Wolves and the Sharks, in the ultimate race. The icy waters make for a treacherous playing field . . . especially when not everyone thinks of it as playing. John Flanagan, author of the international phenomenon Ranger's Apprentice, creates a new cast of characters to populate his world of Skandians and Araluens, a world millions of young readers around the world have come to know and admire. Full of seafaring adventures and epic battles, Book 1 of The Brotherband Chronicles is sure to thrill readers of Ranger's Apprentice while enticing a whole new generation just now discovering the books. Perfect for fans of J.R.R. Tolkien’s Lord of the Rings, T.H. White’s The Sword in the Stone, Christopher Paolini’s Eragon series, and George R. R. Martin’s Game of Thrones/A Song of Ice and Fire series. 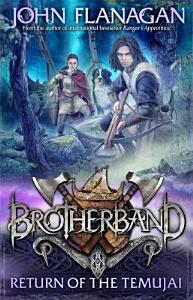 The Heron brotherband are home in Skandia - but their usually peaceful country is in danger. The Temujai have never given up on their ambition to claim Skandia for their own. The ruthless warriors from the Eastern Steppes waited a number of years after the Skandians thwarted them last time - with the help of the legendary Rangers of Araluen - but now they're on the move. The Skandians are concentrating their defences on the one pass through the mountains, and they're ready for battle - but what if the Temujai can find another way down to the coast? Erak sends Hal and his crew to investigate. And stop the Temujai - whatever it takes. 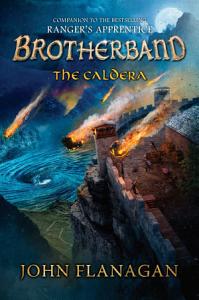 The Herons take to the high seas to fend off pirates and rescue the heir to an empire in the newest adventure from John Flanagan, author of the worldwide bestselling Ranger's Apprentice! Includes BONUS content--a brand-new Ranger's Apprentice short story featuring fan-favorites Will and Maddie! In Hallasholm, Stig is contesting the annual Maktig competition to decide Skandia’s greatest warrior. But a late-night knock on the door brings someone Stig never expected to see again, along with a request the Herons are hard-pressed to refuse: a rescue mission of epic proportions. Across the ocean, the southern city-state of Byzantos is plagued by a crew of pirates who’ve kidnapped the son of Empress Justina. Slipping out of Hallasholm under the cover of darkness, the brotherband sets sail to recover the boy from his kidnappers, heading south to the island of Santorillos where a near-impenetrable fortress stands atop a cliff, surrounded by a lagoon—a caldera—formed by the crater of a volcano. In this explosive seventh book in the action-packed Brotherband Chronicles, the Herons battle pirates amid stormy seas as the fate of an empire rests on their shoulders. 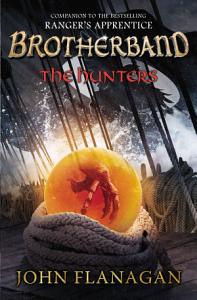 From the author of the global phenomenon and New York Times bestselling Ranger's Apprentice! Hal and his brotherband crew are hot on the trail of the pirate Zavac and they have one thing only on their minds: Stopping the bloodthirsty thief before he can do more damage. Of course, they also know Zavac has the Andomal, the priceless Skandian artifact stolen when the brotherband let down their guard. The chase leads down mighty rivers, terrifying rapids, to the lawless fortress of Ragusa. If Hal is to succeed, he will need to go beyond his brotherband training. He will need to challenge the pirate one-on-one, knowing only one of them will survive. The epic series from Ranger's Apprentice author John Flanagan continues, delivering pulse-pounding adventure and fun. Perfect for fans of J.R.R. Tolkien’s Lord of the Rings, T.H. White’s The Sword in the Stone, Christopher Paolini’s Eragon series, and George R. R. Martin’s Game of Thrones/ A Song of Ice and Fire series. From the Trade Paperback edition. 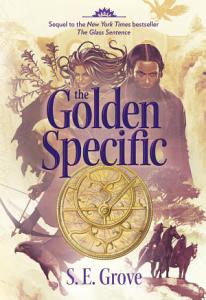 The eagerly-awaited sequel to the best-selling The Glass Sentence -- a historical, fantastical adventure perfect for fans of Philip Pullman! It is the summer of 1892, one year since Sophia Tims and her friend Theo embarked upon the dangerous adventure that rewrote the map of the world. Since their return home to Boston, she has continued searching for clues to her parents’ disappearance, combing archives and libraries, grasping at even the most slender leads. Theo has apprenticed himself to an explorer in order to follow those leads across the country—but one after another proves to be a dead end. Then Sophia discovers that a crucial piece of the puzzle exists in a foreign Age. At the same time, Theo discovers that his old life outside the law threatens to destroy the new one he has built with Sophia and her uncle Shadrack. What he and Sophia do not know is that their separate discoveries are intertwined, and that one remarkable person is part of both. There is a city that holds all of the answers—but it cannot be found on any map. Surrounded by plague, it can only be reached by a journey through darkness and chaos, which is at the same time the plague’s cure: The Golden Specific. 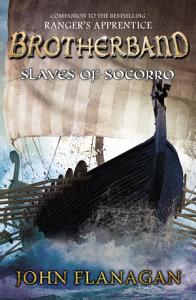 The fourth installment in the New York Times bestselling Brotherband series, for fans of Lord of the Rings and Game of Thrones Hal and his fellow Herons have returned home to Skandia after defeating the pirate captain Zavac and reclaiming Skandia's most prized artifact, the Andomal. With their honor restored, the Herons turn to a new mission: tracking down an old rival turned bitter enemy. Tursgud—leader of the Shark Brotherband and Hal's constant opponent—has turned from a bullying youth into a pirate and slave trader. After Tursgud captures twelve Araluen villagers to sell as slaves, the Heron crew sails into action . . . with the help of one of Araluen's finest Rangers! From the Trade Paperback edition. 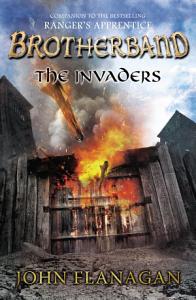 From the author of the global phenomenon Ranger's Apprentice! Hal and the Herons have done the impossible. This group of outsiders has beaten out the strongest, most skilled young warriors in all of Skandia to win the Brotherband competition. But their celebration comes to an abrupt end when the Skandians' most sacred artifact, the Andomal, is stolen--and the Herons are to blame. To find redemption they must track down the thief Zavac and recover the Andomal. But that means traversing stormy seas, surviving a bitter winter, and battling a group of deadly pirates willing to protect their prize at all costs. Even Brotherband training and the help of Skandia's greatest warrior may not be enough to ensure that Hal and his friends return home with the Andomal--or their lives. Perfect for fans of J.R.R. Tolkien’s Lord of the Rings, T.H. White’s The Sword in the Stone, Christopher Paolini’s Eragon series, and George R. R. Martin’s Game of Thrones/A Song of Ice and Fire series.