In Order to Read Online or Download Soframiz Full eBooks in PDF, EPUB, Tuebl and Mobi you need to create a Free account. Get any books you like and read everywhere you want. Fast Download Speed ~ Commercial & Ad Free. We cannot guarantee that every book is in the library! 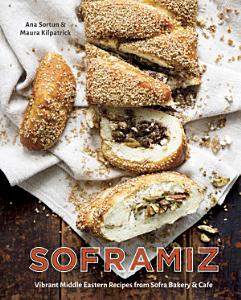 A charming collection of 100 recipes from Cambridge's Sofra Bakery and Cafe, showcasing modern Middle Eastern spices and flavors with exotic yet accessible sweet and savory dishes geared toward everyday cooking and entertaining. Ana Sortun and Maura Kilpatrick have traveled extensively throughout Turkey and the Middle East, researching recipes and gaining inspiration for their uber-popular cafe and bakery, Sofra. In their first cookbook together, the two demystify and explore the flavors of this popular region, creating accessible, fun recipes for everyday eating and entertaining. With a primer on essential ingredients and techniques, and recipes such as Morning Buns with Orange Blossom Glaze, Whipped Feta with Sweet and Hot Peppers, Eggplant Manoushe with Labne and Za'atar, and Sesame Caramel Cashews, Soframiz will transport readers to the markets and kitchens of the Middle East. 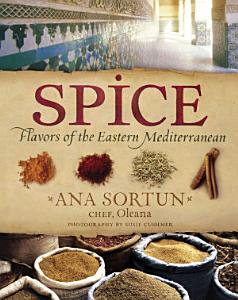 On a trip to Turkey as a young woman, chef Ana Sortun fell in love with the food and learned the traditions of Turkish cooking from local women. Inspired beyond measure, Sortun opened her own restaurant in Cambridge, Massachusetts, the award-winning Oleana, where she creates her own interpretations of dishes incorporating the incredible array of delicious spices and herbs used in eastern regions of the Mediterranean. In this gorgeously photographed book, Sortun shows readers how to use this philosophy of spice to create wonderful dishes in their own homes. She reveals how the artful use of spices and herbs rather than fat and cream is key to the full, rich flavors of Mediterranean cuisine -- and the way it leaves you feeling satisfied afterward. The book is organized by spice, detailing the ways certain spices complement one another and how they flavor other foods and creating in home cooks a kind of sense-memory that allows for a more intuitive use of spice in their own dishes. The more than one hundred tantalizing spice categories and recipes include: Beef Shish Kabobs with Sumac Onions and Parsley Butter Chickpea and Potato Terrine Stuffed with Pine Nuts, Spinach, Onion, and Tahini Crispy Lemon Chicken with Za’atar Golden Gazpacho with Condiments Fried Haloumi Cheese with Pear and Spiced Dates Absolutely alive with spices and herbs, Ana Sortun’s recipes will intrigue and inspire readers everywhere. 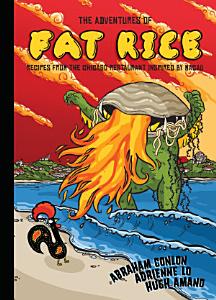 Located just an hour away from Hong Kong on the banks of the Pearl River in China, Macau is one of the wealthiest cities in the world-the so-called oLas Vegas of the East,o and the only place in China where gambling is legal. However, Macau's modern-day glitz belies its rich, centuries-old history as one of the greatest trading ports in the world. Ruled by Portugal from the 1600s until 1999, Macau was a crossroads along the spice route, and a place where travelers from Europe, Southeast Asia, South Asia, and mainland China traded resources, culture, and food-making Macanese cuisine one of the most eclectic and deliciously unique food traditions in the world. Abraham Conlon and Adrienne Lo are the chefs and owners of the wildly popular and critically-lauded Chicago restaurant Fat Rice, where they serve their own unique take on the food of Macau. The Adventures of Fat Riceis a fun and whimsical tear through modern-day Macau-and the minds of two wildly creative chefs. Dishes like Hong Kong French Toast (Macau's version of dim sum), Po Kok Gai (a Portuguese chicken curry), and the titular Arroz Gordo (if Spanish paella and Chinese fried rice had a baby) are enticingly exotic yet accessible and even playful. Featuring a mish-mash of classic and interpretative dishes, plus comic book-style illustrations and edgy location photography, The Adventures of Fat Ricewill be the first book to bring the eclectic, richly satisfying, and previously unheralded food of Macau to the mainstream. 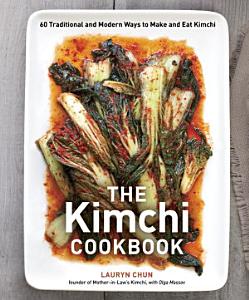 A DIY cookbook for crafting and cooking with kimchi at home, building on the pungent Korean Pickle's recent rise to stardom among top chefs, adventurous eaters, and connoisseur's of fermented, live-culture foods. Korea’s legendary condiment is taking America by storm with its vibrant, versatile balance of flavor and just the right amount of spice. Making kimchi is the next frontier for anyone who enjoys DIY food projects, and homemade kimchi is a must-have for connoisseurs of the beloved Korean pickle. Following traditional kimchi-making seasons and focusing on produce at its peak, this bold, colorful cookbook walks you step by step through how to make both robust and lighter kimchi. Lauryn Chun explores a wide variety of flavors and techniques for creating this live-culture food, from long-fermented classic winter kimchi intended to spice up bleak months to easy-to-make summer kimchi that highlights the freshness of produce and is ready to eat in just minutes. Once you have made your own kimchi, using everything from tender and delicate young napa cabbage to stuffed cucumber, you can then use it as a star ingredient in Chun’s inventive recipes for cooking with kimchi. From favorites such as Pan-Fried Kimchi Dumplings and Kimchi Fried Rice to modern dishes like Kimchi Risotto, Skirt Steak Ssam with Kimchi Puree Chimichurri, Kimchi Oven-Baked Baby Back Ribs, and even a Grilled Kimcheeze Sandwich, Chun showcases the incredible range of flavor kimchi adds to any plate. With sixty recipes and beautiful photographs that will have you hooked on kimchi’s unique crunch and heat, The Kimchi Cookbook takes the champagne of pickles to new heights.

With text bursting full of the author's charisma and perfectionism, Oxer offers delightful Turkish dishes that are authentic, healthy, and innovative. 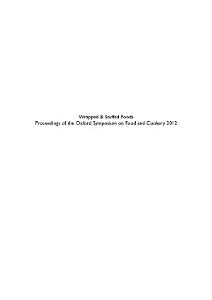 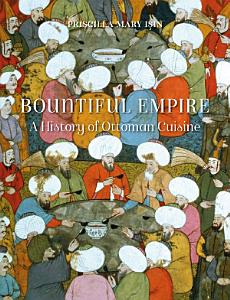 The Ottoman Empire was one of the largest and longest-lasting empires in history—and one of the most culinarily inclined. In this powerful and complex concoction of politics, culture, and cuisine, the production and consumption of food reflected the lives of the empire’s citizens from sultans to soldiers. Food bound people of different classes and backgrounds together, defining identity and serving symbolic functions in the social, religious, political, and military spheres. In Bountiful Empire, Priscilla Mary Işın examines the changing meanings of the Ottoman Empire’s foodways as they evolved over more than five centuries. Işın begins with the essential ingredients of this fascinating history, examining the earlier culinary traditions in which Ottoman cuisine was rooted, such as those of the Central Asian Turks, Abbasids, Seljuks, and Byzantines. She goes on to explore the diverse aspects of this rich culinary culture, including etiquette, cooks, restaurants, military food, food laws, and food trade. Drawing on everything from archival documents to poetry and featuring more than one hundred delectable illustrations, this meticulously researched, beautiful volume offers fresh and lively insight into an empire and cuisine that until recent decades have been too narrowly viewed through orientalist spectacles. 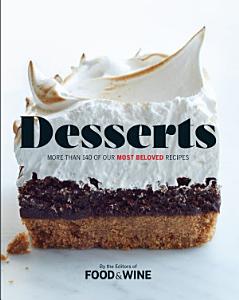 Who doesn't want to indulge in a giant s'mores bar layered with a crazy-crunchy graham cracker crust, fudgy chocolate filling and a dreamy mile-high meringue? Desserts brings together the best sweet dishes published by Food & Wine magazine over the past 30 years. It's chockful of tried-and-true keepers, including Stephanie Izard's Skillet Graham Cake with Peaches and Blueberries, Gooey Chocolate Chip Sandwich Bars, and star pastry chef Dominique Ansel's take on marshmallows. Enjoy smart and informative cooking tips and discover recipes from such food aficionados as Ina Garten, Rick Bayless and Jacques Pepin as well as Dorie Greenspan, Tom Colicchio and Joanne Chang. Gorgeous color photographs throughout provide endless inspiration in this expertly curated collection. No matter the dessert-cakes, pastries, cookies and bars, pies and tarts, frozen treats and candies-Desserts has you covered! 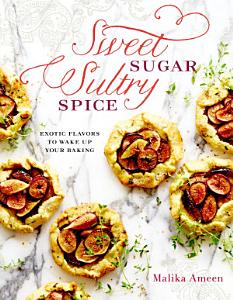 A diverse and accessible collection of spice-enhanced recipes that will transform your baking and awaken your senses--from a classically trained pastry chef. Welcome to a world of exotic spices and flavorings from the warm embrace of clove and ginger to the fiery touch of peppercorns and chiles, from the sensual kiss of cardamom and rose to the surprising sensations of sumac and za'atar. With encouraging language, invaluable tips, and a passionate approach to flavor, Malika Ameen seeks to push spices beyond the realm of savory to the world of sweet where they can add everything from a delicate whisper to a surprising punch to cakes and tarts, cookies and bars, ice creams and sorbets, barks and brittles, and more. The 78 recipes are arranged by the feelings and sensations they evoke: Spicy and Warm; Floral and Aromatic; Bright and Fresh; Savory, Earthy and Nutty; and Complex and Mysterious. Create showstoppers such as Roasted Peach and Custard Borek for your next culinary gathering; its velvety saffron cream and subtle cardamom sugar are all wrapped inside light, crunchy layers of phyllo dough. Update classics with a new twist such as Lusty Lemon Squares with a spiced dark chocolate crust dotted with pink peppercorns. Kids and the young at heart will delight in the orange zest, vanilla bean, and cinnamon spiced churros with their accompanying sticky toffee sauce. Beautiful full-page images and an invaluable spice glossary help round out an accessible addition to any dessert library. 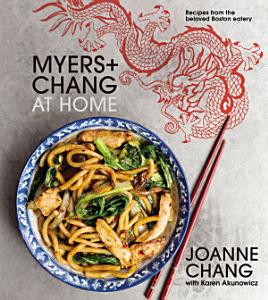 From beloved chef and author Joanne Chang, the first cookbook from her acclaimed Boston restaurant, Myers+Chang Award-winning and beloved chef Joanne Chang of Boston’s Flour bakery may be best known for her sticky buns, but that’s far from the limit of her talents. When Chang married acclaimed restaurateur Christopher Myers, she would make him Taiwanese food for dinner at home every night. The couple soon realized no one was serving food like this in Boston, in a cool but comfortable restaurant environment. Myers+Chang was born and has turned into one of Boston’s most popular restaurants, and will be celebrating its tenth anniversary in 2017, just in time for publication of this long-awaited cookbook. These recipes, all bursting with flavor, are meant to be shared, and anyone can make them at home—try Dan Dan Noodle Salad, Triple Pork Mushu Stir-fry, or Grilled Corn with Spicy Sriracha Butter. This is food people crave and will want to make again and again. Paired with the couple's favorite recipes, the photography perfectly captures the spirit of the restaurant, making this book a keepsake for devoted fans.